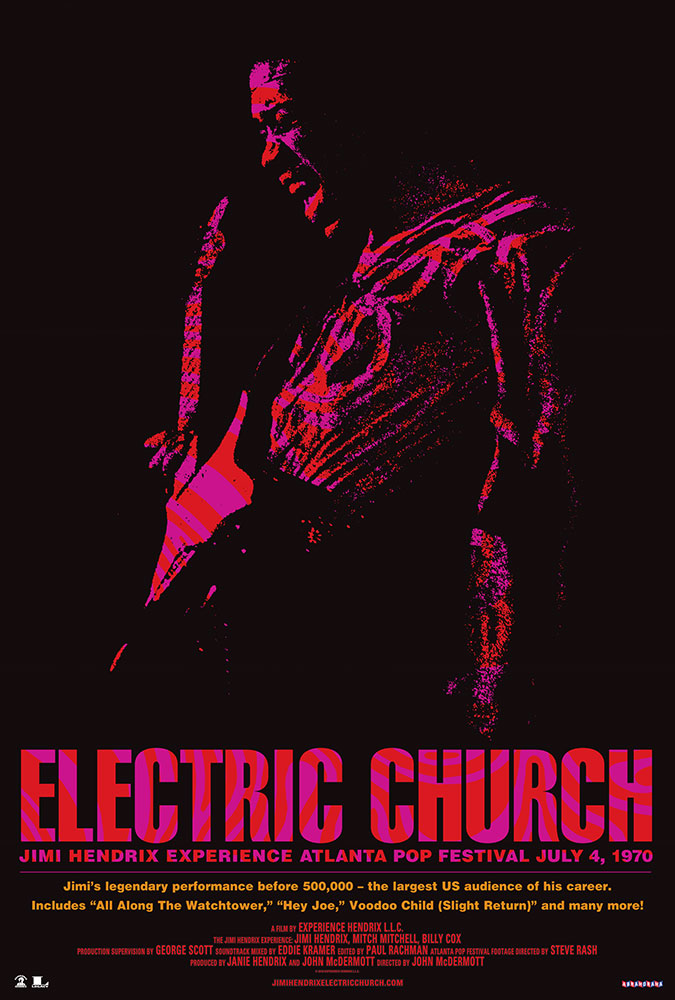 About 100 miles south of Atlanta, next to a field just outside the town of Byron, there stands a plaque erected by the Georgia Historical Society marking the location of the Second Atlanta International Pop Festival, where from July 3-5, 1970, “Over thirty musical acts performed, including rock icon Jimi Hendrix playing to the largest American audience of this career.” Despite the overwhelming attendance (estimated to be 300,000-400,000), the festival and Hendrix’s performance in particular, has not received its due in terms of historic importance and impact until now.

Originally debuting in 2015, Jimi Hendrix: Electric Church, the critically acclaimed documentary film about the music legend’s Atlanta Pop set and the circumstances surrounding it, will makes its theatrical debut in early 2019 and is set to make an historic run of limited engagements of select theaters worldwide.

The film documents the massive festival hailed then as the ‘Southern Woodstock’ and recognized now as the last great US Rock Festival. The film presents the story of how rock music’s burgeoning festival culture descended en masse to the tiny rural village of Byron, Georgia and witnessed Hendrix’s unforgettable performance.

The film contains breathtaking, color 16mm footage of Jimi Hendrix’s Independence Day appearance, a mere ten weeks before his untimely passing. Standout performances include such Hendrix classics as “Hey Joe,” “Voodoo Child (Slight Return),” “Purple Haze,” as well as confident, compelling versions of songs such as “Room Full Of Mirrors,” “Freedom,” and “Straight Ahead” that had not yet been issued by Jimi on an Experience album, but were intended to be part of the album he was working on that summer. “Star Spangled Banner,” played against a backdrop of exploding fireworks, is another highlight, which Cooley recalls as having “knocked peoples’ socks off.”

By the beginning of the 1970s, Jimi Hendrix was unquestionably one of the most exciting rock musicians of his generation, having captivated the world with his highly stylized approach to blues guitar. In Electric Church, Paul McCartney freely admits to worshipping him, adding, “We all played guitar. We all knew a bit. But he seemed to know more than us.”

Jimi Hendrix put the rock festival concept on the map with his blistering performance at California’s Monterey Pop Festival in 1967, headlining 1968’s inaugural Miami Pop Festival, and providing the soundtrack for the counterculture with a dazzling set at Woodstock in 1969.

His performance at the Second Atlanta International Pop Festival was not only significant on a musical level, but also in terms of socio-political dynamics. The organizers were keen to push back against the cultural divide that was very much in evidence in the Deep South. It was assumed that rural audiences would not take kindly to “long-hair” bands, and that black and white artists could not comfortably exist on the same bill; Atlanta Pop set out to challenge those beliefs. Hendrix’s music and message of universal love made him the ideal artist to represent that pushback, and, appropriately, was the first act booked for the festival.

In the sweltering Georgia heat, amongst intimidating bikers who were hired as security, hundreds of thousands of mostly young music fans descended upon the festival grounds, eventually knocking over fences and leaving the organizers with no choice but to declare it a free event. Law enforcement, not equipped to handle such crowds, adopted a hands-off policy with regards to crowd control, drug use and nudity. Against incredible odds, the event proved to be largely peaceful. By the time The Jimi Hendrix Experience took the stage on the evening of July 4, the audience swelled to more than 300,000.

Massive, anarchic music fests in the U.S., unencumbered by high ticket prices and corporate sponsors were soon to be extinct, and the Atlanta Pop Festival was the last of this dying breed. Glenn Phillips (Hampton Grease Band) says, “This was, certainly in retrospect, sort of the end of an era, and a great end to an era. It was a powerful moment.”

The Atlanta festival footage in Electric Church was shot by Steve Rash, later known for directing such Hollywood films as The Buddy Holly Story and Can’t Buy Me Love. Rash intended for the footage he and his team were filming to be used for a documentary in the vein of Woodstock. When a deal couldn’t be secured, virtually all of the film lay undeveloped inside Rash’s barn for over three decades. The full-color film stock held up remarkably well, and makes for a transcendent viewing experience.

In describing his first-hand account, Bill Mankin who worked on the construction and stage crews for the festival explains, “at the center of the vortex was the master magician on guitar: the personification of a life lived fully and wildly, with no boundaries, no limitations, and aiming for the stars at light speed.”